While visiting my dad for Christmas, I was struck by his accounts of ‘king tide’ flooding that affected his South Florida neighborhood at the end of September 2015. He said for three days during high tide, salty ocean water rose out of the storm drains all along the canal-front street. The water was higher than the seawall in some places, and reached across the street and into the lawns of the homes facing the canal. This video shows what it looked like nearby at the time:

Someone light-heartedly put up this ‘no wake’ sign (below). This picture shows what the flooded area looked like in between high tides:

According to my dad’s accounts, all of the grass and most of the plants exposed to the salty floodwaters died shortly after the event. The Florida native salt tolerant plants like mangroves and sea-grapes did fine. He remarked how some low lying inland parts of Ft Lauderdale also had similar tidal flooding from storm drains.

By the time I visited, two months had passed, and most of the neighborhood had been made to look more or less the way it did before the tidal flooding. Most of the grass along the canal was re-sodded, as were most of the lawns facing the canal (see pictures below). Aside from the noticeably new sod, some mud where grass used to be, and a few standing dead trees, you wouldn’t know that the street was under sea level a few months ago.

mud in foreground, new sod in background. the seawall at right was below sea level during the flood.

this seawall was overtopped during the floood

new sod on left, dead lawn on right. notice the stripe of new asphalt across street from installation of check valve in storm drain

one of the offending storm drains, new sod all around it, dead hedge and trees behind it

signs of construction for the installation of storm drain check valves

One change did stand out however, the road was re-asphalted around each of the offending storm drains–the telltale signs of the post-flood work the city had done installing check valves in each drain. These check valves will allow the water to drain out as long as the sea level is below the drain level. When the sea level rises above the drain level, the valve closes, preventing the back-flow flooding thorough the drain. And so the first small steps of climate adaptation begin. The check valve may be a good first step to buy more time. But when the valve is closed, rain water will have no place to go. And when the the sea level is higher than the seawall, or your neighbor’s seawall, then the water will find the lowest spot, probably right on top of those check valves.

What caused this flooding?

This flooding was the result of an unusually high tide in combination with relative sea level rise (RSL, which accounts for mean sea level rise and land subsidence) and other possible factors. Although the colloquial term king tide is often used to describe any unusually high tide, this flooding was specifically the result of a proxigean spring tide.

Spring tides occur when the earth, moon, and sun are inline (new and full moons) and cause much higher (and lower) tides than neap tides, which occur when the 3 bodies are at right angles (1st and 3rd quarter moons). Spring tides occur every new moon and full moon. Because the gravity of the moon and sun are both pulling inline together (syzygy) during the full and new moon phases, they exert a stronger pull on earth’s liquid water during spring tides. With both the moon and sun pulling from the same side of earth, a new moon spring tide is slightly stronger than a full moon spring tide.

Derived from Newton’s universal law of gravitation, the tidal force equation (below) shows that the tidal force is inversely proportional to the cube of the distance between the two bodies. This means that although the sun is much larger than the moon, the moon ends up having a stronger influence on earth’s tides due to its closer proximity. It also means that a small change in the distance separating the two bodies can have a significant effect.

Once every 28 days, the moon in its elliptical orbit makes its closest approach to earth, known as the moon’s perigee. As shown above, a slight change in separation distance, r, can have a significant effect on the gravitational force, and hence on the amplitude of the tides. During the moon’s perigee, earth will experience slightly amplified tides. 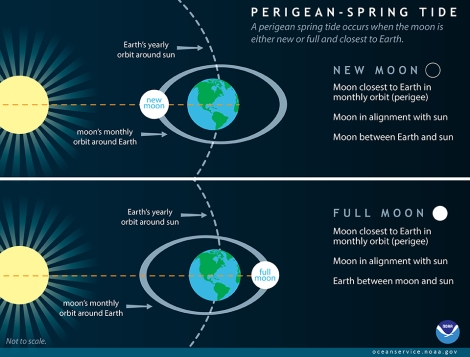 image: NOAA: What is a perigean spring tide?

Mark these dates on your calendar!

This will be the subject of my next post…